Does Pizza Dough Have Eggs or Milk? 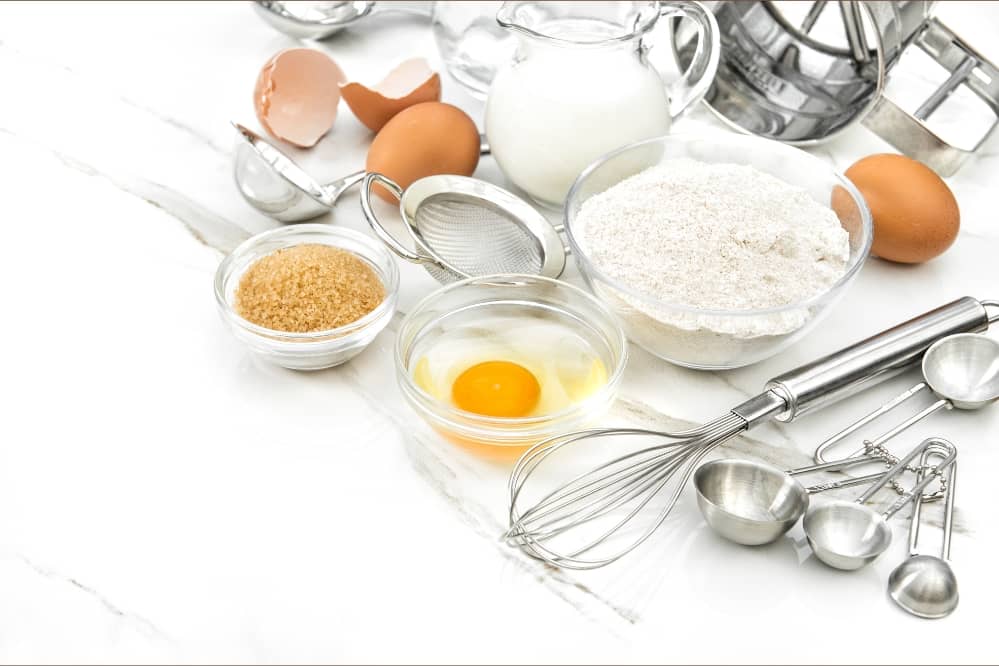 Pizza dough is one of the tastiest and most uniquely complex things in the world. In reality, every single ingredient that you see in a recipe has a role that it plays to ensure your pizza is just as good as it can be - from the gluten content of the flour to any simple herbs that you might add for flavor.

What are the main pizza dough ingredients?

Pizza dough is, essentially, just an altered form of bread dough. This means that it doesn’t need to be complex at all, and can be based entirely on the main four ingredients that are part of all bread recipes: flour, water, salt, and yeast.

Those ingredients interact to essentially create a paste. In that paste, the yeast can feed on the sugars within the flour, leading to gases being produced, and food rising easily and quickly. This means that your pizza dough is light and beautiful.

The thing that catches those gases is the gluten from your pizza dough, which comes from the flour. During kneading, you create gluten within the pizza dough and develop it so it’s a little more strong with each press.

Those four ingredients are the main staple ingredients to any bread-like thing from any country around the world. The grain that the flour is derived from may change a little, but that’s about it.

The only additional ingredients sometimes included in pizza are olive oil and sugar. Sugar is used to feed the yeast more quickly, which gives pizza dough a better rise, and olive oil is used to make the crust a bit darker and crispier after it’s been cooked.

Both of these additions are optional, though they might make some delicious and interesting additions to your meals.

What does adding milk to pizza dough do?

The fat content in the milk will be easily mixed into the pizza dough, leading to a dough that’s referred to as being enriched. This fat content leads to something called the Maillard reaction, where things being cooked in the presence of fat will start to brown, the same way that anything baked or fried starts to go brown. The enzymes don’t tend to affect the taste or the browning of pizza dough, instead actually having a negative effect on the dough. Liquid milk can slow down yeast growth, leading to the dough needing to be proofed for longer. It can also weaken the protein in pizza dough, leading to a more crumbly final pizza.

To remove the impact of the enzymes and solely add milk for the fat content, you can scald the milk in a pan. To do this, simply place the milk over a low heat until wisps of steam rise evenly from the surface. Remove it from the heat and allow it to cool before adding it to your dough, and the enzymes will be denatured, meaning that they will no longer work as they are supposed to.

What does adding eggs to pizza dough do?

Adding eggs to dough is another method of enriching dough to give a different final product. This is most commonly seen in challah bread, which contains quite a lot of eggs and fat to give it the exceptional softness that is characteristic of it.

Adding eggs to your pizza dough recipe will make the whole pizza taste a lot richer and heavier. It’s typically avoided for this reason, as the dough isn’t meant to shine on its own, but rather be a part of a larger, more complex picture.

However, solely using egg whites can give the dough some structure. This egg white structure combined with the gluten structure makes for a crispier final crust, which is quite desirable. This may well be the reason that you add egg whites to your recipe, as people enjoy that crispness. Something to bear in mind with an egg-containing pizza dough recipe that you might find online is that eggs in pizza dough recipes tend to have some level of sugar within them, too. This is generally because the combination of eggs and sugar in a dough leads to a richer, sweeter final dough, which can be the desired effect for some people.

We would recommend steering clear of adding sugar, though - a potently sweet dough isn’t generally considered to be the ideal for a great pizza. Instead, aiming for a savory, straightforward crust can be very tasty. That crust may contain whole eggs or egg whites, and we would recommend you experiment a little with them.

What gives pizza dough its flavor?

Very simple pizza dough is only comprised of four ingredients, as we said before. The only ingredients in a recipe that simple which bring flavor forward are the yeast and the salt.

Yeast can add varying degrees of flavor depending upon the yeast used. Instant yeast or a similar dried option doesn’t tend to add a lot of flavors. However, using sourdough yeast can add a lot of unique sourness to a dough that’s often appreciated by many pizza lovers.

So, it turns out that the answer to the simple question we posed at the start of the article isn’t actually that simple. However, we’ve got an answer - pizza dough can contain eggs or milk, though it doesn’t need to. We hope that helps you make even better dough on your next pizza experiment - happy baking!